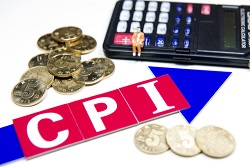 Each month the Bureau of Labor Statistics (BLS) reports the Consumer Price Index (CPI) which is also referred to as the rate of inflation. The reason this is done by the BLS is primarily to determine the change in the cost of living. Following are descriptions of some of the terms used in discussions on inflation: